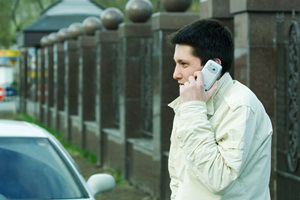 There are currently close to 6 billion cell phone subscriptions worldwide, and increased usage of cell phones has understandably led to a greater level of interest in how safe they are.

The main concern for our health is that mobile phones emit and receive electromagnetic radiation as a result of their need to communicate with relay towers, and some of this radiation is absorbed by the head when the phone is held up to the ear.

Whether or not the radiation (both the amount and the frequency) that a typical mobile phone user is likely to receive is potentially damaging to their health has been the subject of debate for some time.

Does Cell Phone Use Lead to Brain Cancer?

Anecdotal evidence that high mobile phone use can potentially lead to brain cancer is not hard to find. Newspapers and other media sources are only too ready to run such stories.

However, given that there are so many people using mobile communication so regularly, the chances are that someone is going to have a brain tumor at some point, whether or not there is any link with the amount of time they spend on their phone.

The obvious question is whether or not there is good reason to be concerned over how and how much you use your phone.

The Evidence Against Cell Phone Usage Leading To Brain Cancer

The most recent assessment of the scientific evidence of mobile phone safety was carried out by the European Commission Scientific Committee on Emerging And Newly Identified Health Risks (SCENIHR). They concluded that mobile phone usage was unlikely to increase the risk of developing brain tumors.

The most recent results from a long-term study by researchers from the Institute of Cancer Epidemiology at the Danish Cancer Society in Denmark also failed to find any link between mobile phone usage and the development of brain tumors or any other cancers of the nervous system.

This study was particularly significant in that it used most of the Danish population to determine if there was any difference in the incidence of brain cancer between mobile phone users and non-mobile phone users. Unsurprisingly, this work has been quoted frequently, especially by cell phone companies, as evidence that their products have now been given a completely clean bill of health.

The Evidence For Cell Phone Usage Leading To Brain Cancer

In contrast to the previous results, the conclusion of a 2010 paper published in the International Journal of Epidemiology on the subject suggested that while no overall link was found between two kinds of brain tumor and mobile phone usage, the data did point to a possible increase in the development of glioma-type tumors in the most intensive users

The authors also pointed out that since the new generations of smart phones are being used for even greater periods of time, especially by younger people, further and ongoing studies in this area are definitely merited.

In 2011, the World Health Organization (WHO) classified mobile phone radiation as “potentially carcinogenic to humans.” Following from this, many countries have adopted a precautionary approach and suggested moderation in cell phone usage. Using a hands-free kit to avoid holding a phone next to your head has also been advised.

While the available evidence suggests that low and normal usage of a mobile phone does not increase your risk of developing a brain tumor, it is probably wise to reduce your exposure to electromagnetic radiation as much as you can, and certainly to avoid spending long periods of the day with a phone next to your ear.