And, it may just be the artificial sweeteners that aren’t working. A study published in 2007 (R. Dingra et al, Circulation, 116: 480-484, 2007 ) showed that people consuming regular (sugar containing) sodas were 48% more likely to become obese over a four-year period than people who primarily drank water. That wasn’t surprising. The surprising finding from this study was that people who consumed diet sodas were just as likely to become obese as those drinking regular sodas.

Now you may be saying: “Wait a minute. I thought I read that consuming diet sodas actually helps people lose weight.” The answer is that in those studies dietitians rigorously controlled the caloric intake from other foods so that the only caloric difference was between the diet sodas and the regular sodas. Under those conditions the results are fairly obvious. Fewer calories from sodas = weight loss. But those aren’t the results that you see in free living populations where you don’t have a dietitian peering over your shoulder. In those populations people consuming diet sodas tend to take in the same number of total calories overall and gain just as much weight as people drinking regular sodas.

Obviously, people consuming diet sodas which contain artificial sweeteners must compensate by consuming extra calories from other foods. But, why are they consuming those extra calories? Some experts hypothesize that the answer is physiological. The sweet taste of the diet sodas triggers the release of insulin, which drives down blood sugar levels and makes people hungrier. Other experts hypothesize that the answer is psychological. People simply feel virtuous for consuming the diet sodas and feel they can now splurge somewhere else. 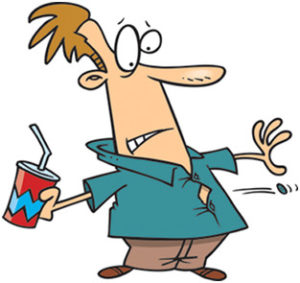 Animal studies have suggested that the cause may actually be physiological. Those studies have shown that there are “sweetness receptors” in the intestine that respond to the sweetness of sugars and trigger an increase in the level of proteins that transport sugars from the intestine into the bloodstream. That makes great sense from an evolutionary point of view. If we’re eating a low carbohydrate diet we really don’t want to waste a lot of energy producing proteins that transport sugars into our bloodstream. However, whenever we eat foods high in carbohydrates we don’t want to waste that carbohydrate. So, our intestine rapidly breaks the carbohydrates down to simple sugars, and our body responds by increasing our ability to transport those simple sugars into the bloodstream.

With this in mind, do artificial sweeteners help you lose weight?  Let’s continue to investigate.

A recent study (M.Y. Pepinoet al, Diabetes Care, 36: 2530-2535, 2013 ) provides a possible explanation for these conflicting results. This study was similar to many of the previous studies in that obese adults were given either sucralose (an artificial sweetener) or water 10 min before being given a fixed amount of glucose, and blood sugar and insulin levels were followed over the next five hours. What made this study unique was that overweight participants were selected who did not normally consume artificially sweetened beverages or foods (Those people are hard to find in the overweight US population). 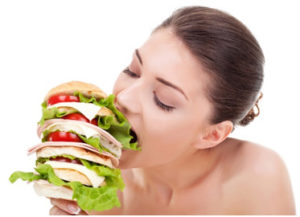 And the results were fairly clear-cut. The participants consuming sucralose prior to the glucose load had a 20% greater increase in blood sugar levels, a 20% greater increase in the amount of insulin produced, and significantly lower blood sugar levels three hours after the glucose load than participants consuming water prior to the glucose load. In the words of the authors: “These data suggest that sucralose ingestion is not physiologically inert but affects the glycemic [blood sugar] response to oral glucose load and potentiates glucose stimulated insulin secretion in obese people.” Basically, what they are saying is that sucralose primes their bodies so that they are more likely to experience blood sugar swings when they subsequently consume carbohydrates. [And that can lead to food cravings and weight gain.]

The authors hypothesized that some previous studies had not found an effect of artificial sweeteners on blood sugar and insulin levels because most of the people in those studies were already consuming artificially sweetened beverages on a regular basis and their intestinal sugar transport proteins were already maximally stimulated. Basically, what they are saying is that when someone is regularly consuming artificial sweeteners the damage has already been done (sugar transport is already maximal), and a single dose of an artificial sweetener will not have any significant additional effect.

So, do artificial sweeteners help you lose weight?  I think you know.

However, the reason why diet sodas appear to promote obesity rather than prevent it has remained elusive.